Book by Chris D’Arienzo
Arrangements and Orchestrations by Ethan Popp 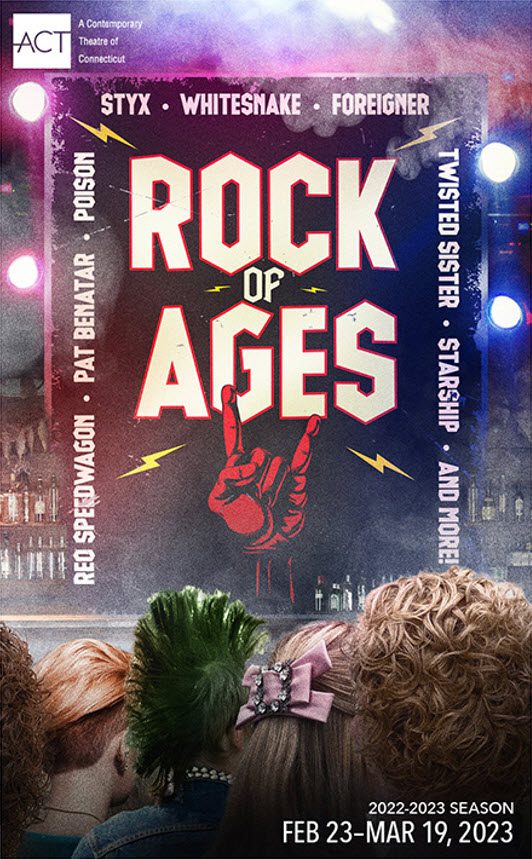 Did someone say “1980’s”?!?!? ROCK OF AGES takes you back to the time of big bands with big egos playing big guitar solos and sporting even bigger hair! This five-time Tony Award-nominated Broadway hit will transport you back to a simpler time – 1987! Featuring 80’s rock hits like “We Built This City”, “We’re Not Gonna Take It”, “Here I Go Again,” “Hit Me With Your Best Shot”, “Sister Christian”, “Every Rose Has Its Thorn”, and “Don’t Stop Believin”, ROCK OF AGES is a non-stop party that will have you rock and rollin’ all night long!! (or at least until the curtain goes down…). ROCK OF AGES takes place on Hollywood’s Sunset Strip and follows Stacee Jaxx, aspiring rock star Drew, and small-town girl Sherri, as developers sweep into town with plans to turn the fabled Strip into just another capitalist strip mall. Can Drew, Sherri and the gang save the strip (and themselves) before it’s too late? Only the music of hit bands Styx, Journey, Bon Jovi, Whitesnake, REO Speedwagon, Pat Benatar, Twisted Sister (and more) hold the answer! You DON’T want to miss ROCK OF AGES at ACT of CT! It’s gonna be “totally tubular dude”!