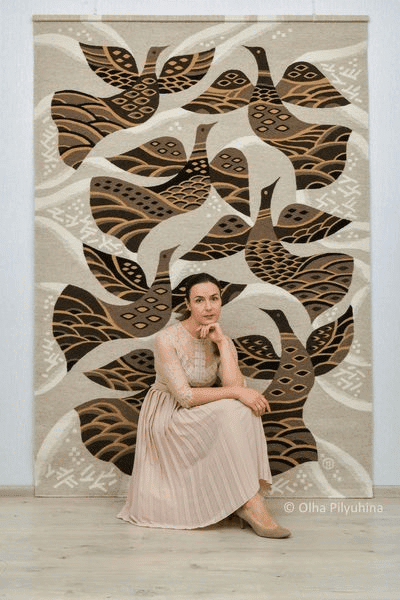 Olha Pilyuhina is a Ukrainian artist whose richly detailed tapestries combine the traditions of Ukrainian weaving and history with the narrative symbolism of Renaissance tapestries. She has been recognized by the government of Ukraine as an honorary doctor of traditional art and has received several prestigious grants from the office of the President of Ukraine. She teaches art in the art department of the Poltava Polytechnic Institute. Many of her works have been acquired by major museums in Ukraine and are in private collections in Ukraine and abroad.

Olha has exhibited her work widely in Ukraine and in Europe; this is her first show in the United States.

Located in Eastern Ukraine, in the Poltava region, Olga’s life and work have been severely affected by the Russian invasion of Ukraine. She is unable to teach or to make art. Her artworks are hidden in four different locations, to prevent or at least minimize the possibility of damage from the war. She has no opportunity to exhibit in Ukraine. She is, however, still able to ship her works to the United States. The works in this exhibit are available for sale, unless otherwise noted.